Secrets of a Gourmet Pizza

As many of you know, pizza is one of my all time favorite foods. I love the variety that comes with this iconic food. Practically anything I'm craving can go up on a pizza, and I enjoy making all different varieties depending on my mood. I find that there are five secrets to making a gourmet pizza. What is "gourmet" when it comes to pizza? For me, it's something a little bit different and special that makes it unique and delicious. Here are my five key components. 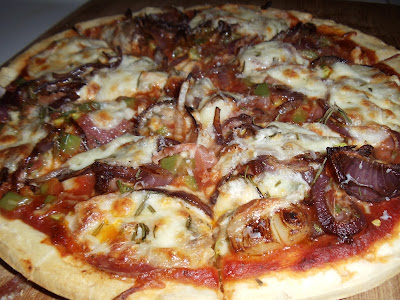 1. Fresh cheese. Back away from the pre-shredded cheese packages people! Shredding your own cheese truly makes a good pizza great. Buy a block of cheddar, colby jack or mozzarella and shred away. You'll be amazed at the improved quality of the fresh cheese. Or, if you have really fresh mozzarella slice it into thin slices and lay it across the pizza (see picture below). It becomes ooey gooey goodness! Or, crumble fresh goat cheese, feta or blue cheese on a pizza to up the flavor and specialness. When an ingredient is this important to a dish, why not use the best?

2. Carmelized onions. A pizza goes from standard to gourmet fare when one of the ingredients is cooked. Carmelized onions are my favorite. Just slice it up, sprinkle with kosher salt, and sautee in olive oil until brown, soft and sweet.  At the end of cooking I like to add a pinch of dried Italian herbs. You can also grill or roast different veggies to add to a pizza, and the flavor quotient soars! The deep flavors of cooked veggies contrast nicely with the fresh ingredients, and the soft texture is scrumptious.

3. Extra virgin olive oil. I rarely cook a thing without it. To make a prepackaged crust taste fresh brush it with some good oil before adding the sauce and toppings. You can also sprinkle the outside crust with sea salt, which adheres to the oil and provides a nice texture and great flavor. I also always drizzle my homemade pizza with a splash of oil before serving. I often go easy on the cheese, and this extra hit of oil makes the pizza moist and flavorful.

4. Fresh herbs. To finish a pizza with fresh herbs is to add the perfect accessories to your outfit. You'd miss them if they weren't there! My three favorite herbs to add to any pizza are basil, rosemary and oregano. I find the rosemary and oregano are best when cooked with the pizza, but the basil should be added raw right before serving. Ahhh fresh flavor!

5. Something salty. This can mean so many things, but for me, if there isn't a salty ingredient on my pizza I feel like something is missing. My favorite salty ingredients include olives, prosciutto, pepperoni/salami and Feta cheese. If you're not using any of these ingredients then sprinkle your pizza with a bit of sea salt for a nice briny flavor and interesting texture. And always, always finish your pizzas with a generous sprinkle of freshly grated Parmesan cheese. 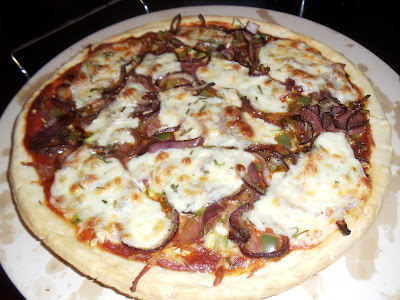 I don't make a lot of burgers at home, but when I do turkey burgers are my favorite! I love many things about turkey burgers. First of all, they are super lean and take on great flavor from anything you add to them. They taste great on a whole wheat bun with lots of veggies, and they satisfy that craving to bite into a big, juicy burger with none of the guilt! I also like that they need to be cooked through, so I don't need to take on the scary job of cooking a beef burger to the perfect medium-doneness. Mostly, they are delicious! I slathered mine with homemade honey mustard and paired them with a creamy, crunchy and flavorful slaw made of celery, granny smith apples and a super easy blue-cheese dressing. Alongside I served sweet potato fries- my favorite accompaniment to any burger! 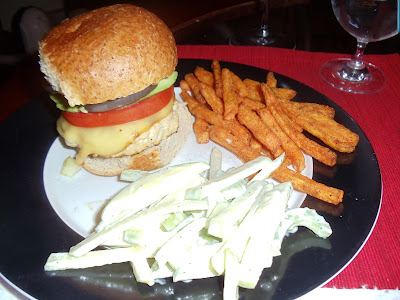 Turkey Burgers with Smoked Gouda
A satisfying big burger that's good for you too!
Makes 4 burgers.

Preheat a large non-stick skillet over medium heat. Drizzle the cut onion slices with olive oil and sprinkle with salt and pepper. Grill each side until brown and carmelized. Remove from heat. In the same pan toast the cut sides of the buns, about 30 seconds.

Add the olive oil, hot pepper sauce, seasoning and pepper to the turkey meat, then form into 4 flat patties. Add a little more oil and grill over medium-high heat, turning once, until nearly cooked through. (About 10 minutes.) Top with the Gouda, cover with a lid, and reduce the heat to medium-low. Cook until cheese is melted and burgers are cooked through, about 2 minutes longer.

Meanwhile, in a small bowl, combine the mustard, horseradish, mayo and honey and stir to combine. Spread the sauce on the toasted buns. Top the bottom bun with the burger, tomato, onions and avocado. Enjoy!

Apple, Celery and Blue Cheese Slaw
I've featured this recipe before, but it's so good it's back!
Serves 4

In a medium bowl, using a fork, combine the blue cheese, mayonnaise and buttermilk until thick and lumpy. Add the sugar and refrigerate.

Quarter, core and chop the apples into matchsticks. Add them to the dressing and stir to coat. Add the celery, cover and refrigerate until ready to serve. Yum! 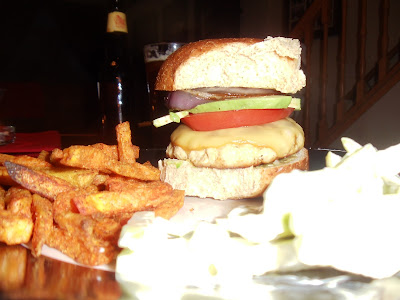 I threw a dinner party for a small group of friends on Saturday night and made a couple dishes that were a big hit. Best of all, they were easy to make! If you've never made chicken thighs before I would highly recommend it. When cooked in a sauce or stew, you can hardly tell the difference between breast meat, and they are so much more affordable. With skinless thighs the fat difference is negligbile. I cooked mine in a smoky tomato sauce with homemade roasted peppers. I had never roasted my own peppers before, but am so glad I did for this recipe, as they provide a much smokier taste than the jarred kind. And it was so easy to do! Alongside I served a baked spinach and ricotta rigatoni that I prepared in the morning and simply baked off before my guests arrived. We also enjoyed salad, veggies and bread on the side. A great dinner! 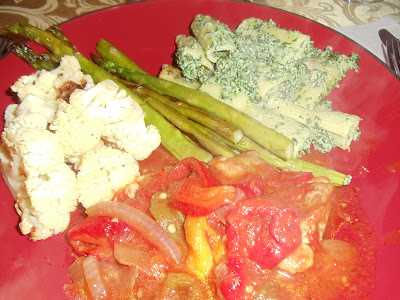 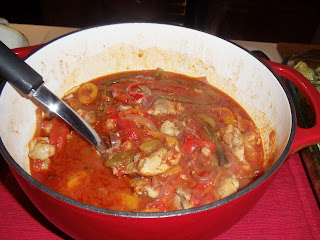 Char the bell peppers under the broiler or over an open flame. Transfer to a bowl, cover with plastic wrap, and let cool. Peel the skins with paper towels, leaving a little char on the peppers for a smoky flavor, then seed and slice the peppers lengthwise into 1-inch strips.

Meanwhile, season the chicken with salt and pepper and coat in the flour. Heat 2 T olive oil in a Dutch oven or large skillet with a tight-fitting lid over medium-high heat. Add the chicken and brown on each side, 5 to 6 minutes total. Transfer to a plate.

Season the sauce with salt and pepper, then cook at a rapid bubble until reduced, about 5 minutes. Lower the heat to medium, stir in the chicken and peppers, cover and cook for 5 mintues to finish cooking the chicken. Uncover, stir and serve from the pan with lots of bread for mopping. 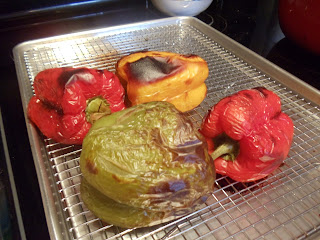 Peppers after roasting, before peeling skin

1 pound rigatoni, or other small pasta 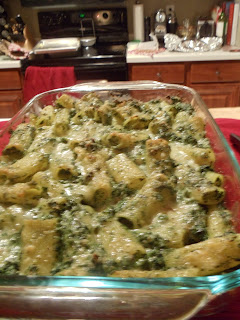 Cook pasta until al dente- do not overcook. Drain pasta and pour in a large bowl and drizzle with some olive oil.

Drizzle olive oil in a 9x13 baking dish, then pour in the pasta mixture. Spread evenly in pan and top with the remaining Parmesan cheese and drizzle with olive oil.

Bake for 20-30 minutes until cheese is melted and beginning to brown on top.

Recipe by Sarah Lang (adapted from Food and Wine) 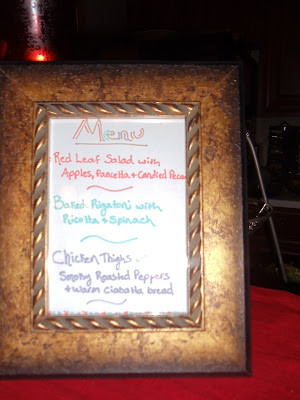 Chef Sarah
I'm a personal chef in the Twin Cities, and I created this blog to share my passion with others who love food and cooking, and to hopefully inspire a few new home cooks to give it a shot. You're invited to wine and dine with me as I share what I'm eating and cooking! Check out my personal chef website, A Simple Kitchen, www.ASimpleKitchenMN.com.